The Other Side of Holocaust Denial 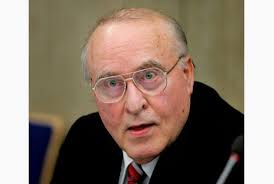 Jewish Holocaust was just one of many we don't hear about.

Although I am the grandson of Holocaust victims, I am embarrassed by some Jewish organizations that want to make the Jewish Holocaust the defining event of World War Two.This is seen in the boom in Holocaust Studies Programs, Holocaust Museums and Hollywood movies like "The Pianist."

Canadian Media mogul Izzy Asper is behind a new $200 million "Holocaust and Human Rights Museum" in Winnipeg. The name equates Jewish persecution with all "human rights."

The Second World War was a human calamity. Over 55 million people died. Why focus on the Jewish experience? This is the cause of anti Semitism in the first place. Jewish power brokers are perpetuating a vicious cycle.

I am also troubled by the attempt to classify people like Ernst Zundel as a "hate criminal." Zundel's website claims only one million Jews were murdered, there were no gas chambers, and Hitler didn't intend genocide. Zundel's claims are repugnant, but he has a right to be wrong. Society needs people to dispute the historical record. One may be right. If spreading false information is a crime, shouldn't we also lock up Tom Brokaw?

Canada has locked up Ernst Zundel. According to his wife, he is being mistreated in prison. He risks deportation as a "security risk." Bernie Farber of the Canadian Jewish Congress concedes Zundel doesn't "actually wield the stick" but "provides oxygen" to extremists. That definition would curb everyone's freedom of speech.

When questioning the truth becomes "hate", we have entered Orwell's "1984" era of thought crime. Don't kid yourself. This is the slippery slope to tyranny and Jewish organizations are partly to blame. We must stand up in defiance.

The charge of hate is used selectively to disarm legitimate opposition. The definition of "hatred" is very selective. For example lesbians spew hatred of men but they are never arrested. Feminists teach impressionable girls that all males are potentially violent sexual predators. That's OK. The Talmud is full of hatred against Christ and Christians, but that doesn't count either.

Canadian MP Svend Robinson wants to make "gay bashing" a hate crime. He isn't talking about violence against gays, which is a genuine crime. He would prevent society from defending itself from activists who teach children that heterosexual roles are not natural but homosexuality is.

"Hate" is a bogus charge anyway. Many so-called "Anti Semites" have written me and most are not hateful or racist in the least. They are trying to defend their legitimate interests from a real and insidious attack. The arch anti-Semite Henry Ford, author of "The International Jew" employed thousands of Jews in his factories. He worked closely with a Jew, Mme. Rosika Schwimmer on his Peace Ship crusade. Ford's Jewish architect Albert Kahn designed hundreds of buildings for him.

Jewish powerbrokers use anti Semitism to disarm opposition to their political agenda. The promotion of the Jewish Holocaust maintains the Jews' status as the world's premier "victims." This gives them immunity from criticism. It makes people feel more favourable to them and more willing to accede to their direction and influence. (The same strategy is used with homosexuals and feminists, the other out-groups used by the elite to subvert society.)

The Holocaust is also a defining event for Jews. Jewish power brokers use victim status to manipulate Jews and extract their donations. Victimhood turns Jews into moral zombies. For most of my life I didn't give two cents for the right of Palestinians to their homes. "We suffered, we deserve a homeland," the logic went.

The Holocaust also serves their New World Order agenda. It is a constant reminder of the pitfalls of nationalism or racial consciousness, two things the financial elite is trying to bury, with the exception of Israel.

To maintain victim priority, it's necessary for the Jewish establishment to practise "holocaust denial" when it comes to other people.

In his book "Crimes and Mercies" (1997) James Bacque describes how he confronted New York Times reporter Drew Middleton with evidence that after the war, the US starved to death over one million German POWs. "What Middleton told me basically was that, yes, he had lied in 1945 and no, it did not matter to him or the New York Times if I exposed this." (183)

"Middleton's sense of security, his sense of the New York Times' power, took my breath away", Bacque writes. "But worse than that, Middleton did not care about this atrocity... the New York Times witnessed it, then denied that it happened. And has gone on denying it into the 1990's." (184)

Bacque estimates that, during the Allied Occupation (1946-1950) an additional eight to twelve million Germans were deliberately starved to death. The war did not end in 1945. For five additional years, Germany was subjected "physical and psychic trauma unparalleled in history." (93)

Red Army soldiers raped up to two million German women during the last six months of the Second World War, around 100,000 of them in Berlin. They also raped Russian women released from German labour camps. We live in a feminist era. Have you seen any movies about these women?

At Potsdam, the Allies ratified the 1939 Soviet-Nazi Pact that gave USSR half of Poland. Poland was compensated with the eastern quarter of Germany, in effect another gift to the Russian empire. This required the expulsion of about 12 million Germans, the largest forced migration in history.

Jews were prominent in the Polish Communist regime. In a stunning reversal of roles, Jewish policemen ordered Germans out of their homes and into cattle cars. In his book, "An Eye for An Eye" Jewish writer John Sack relates that about 1.5 million of these Germans died in the removal. He quotes a German woman from Gleiwitz: "What happened to the Jews was sad. But there was another Holocaust too." (138)

According to Sacks, Jewish Communists extracted another cruel revenge. They filled 1250 Nazi concentration and labour camps and brutally tortured and murdered tens of thousands of Germans. (101 ff.)

Have you seen a movie where concentration camp guards and commandants were Jews? Since 1948, the American Jewish Committee and the Anti Defamation League have censored all Hollywood scripts involving Jews. Since these bodies are extensions of Jewish finance, what other topics have they censored? (Gabler, An Empire of the Own: How Jews Invented Hollywood 1988,p.303)

In his book, "Victims of Yalta", Nicholai Tolstoy documents "Operation Keelhaul," the Allies' forced repatriation of two million Russians who were German slave labourers, prisoners of wars, or soldiers. These people were sent to the Gulag and liquidated. Where is the museum dedicated to them?

In The Holocaust Industry (2000) Norman Finkelstein describes how Israel helped its ally Turkey deny the massacre of one million Armenians in 1915. "Acting at Israel's behest, the US Holocaust Council practically eliminated mention of the Armenians in the Washington Holocaust Memorial Museum, and Jewish lobbyists in Congress blocked a day of remembrance for the Armenian genocide." (p.69)

Jewish organizations dishonor Holocaust victims by using them for political purposes. It is tasteless to cast Jews as the world's premier victims. Humanity is one family and no genocide is more important than another.

To use "hate" to disarm opposition to the Zionist agenda is also repugnant. It leads to tyranny and more anti Semitism.

For Ernst Zundel to deny or understate the Jewish Holocaust is grotesque. But it is not a crime. In these questions, only the truth matters. Let the truth speak for itself. Let Zundel be judged by it.

Let me close with an anecdote. In 1961 when I was 11, my family was travelling in Germany. We stopped at tavern-restaurant where some workingmen were having a loud conversation. They looked at us (a couple with three young children) and said, "We'd better shut up. There may be Jews present."

My family felt threatened. We ate and quickly left. But I realise now those workmen might have been afraid of us. Germany had just endured a gruelling occupation.

Hate is born out of fear. Let us expose the forces that make us fear each other for no reason.