have come to the conclusion that

Hitler was an active Rothschild agent.

It was common knowledge that

the Rothschilds ran both Britain and USSR

and there is no way England would allow Germany

to conquer Russia. His real mission was to lead Germany

Hitler didn't want a world war, and had no stomach for fighting England, according to Pulitzer Prize-winning journalist Louis Kilzer, author of Churchill's Deception (Simon & Schuster, 1994).

Hitler believed the future of Western civilization depended on the cooperation of Germany and her Aryan cousins: England and the United States. His territorial demands were limited to Communist Russia, which he regarded as a proxy for Jewish world ambitions. He was determined to avoid fighting a war on two fronts.

The "miracle at Dunkirk" was an extraordinary peace overture to England. We don't normally associate Hitler with such magnanimity.

In May 1940, the British were on the verge of defeat. The English army was trapped at Dunkirk. Rather than take them prisoner, Hitler halted his generals for three days allowing 330,000 men to escape.

"The blood of every single Englishman is too valuable to shed," Hitler said. "Our two people belong together racially and traditionally. That is and always has been my aim, even if our generals can't grasp it." (Kilzer, p.213)

This is not an attempt to exonerate Hitler. His ideology of Aryan racial supremacy and his enslavement/extermination of "inferior races" ( mainly Jews and Slavs) are abhorrent to me. (Do I need to say this?) My own grandparents were murdered by the Nazis. I believe people can take pride in their race or nationality without seeking to dominate others.

Nonetheless, we should understand that our view of Hitler is influenced by propaganda. The Allies were also guilty of atrocities and war crimes. Furthermore, Hitler was created, manipulated and destroyed by the same Illuminist clique that runs the world today.

According to Kilzer's well-documented book, Hitler was trying to convince the English to make peace. In exchange, he was ready to retreat from Western Europe and from much of Poland. 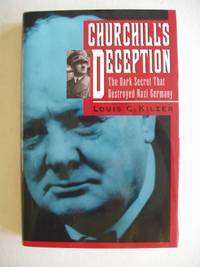 Kilzer describes how British Intelligence (an arm of the Illuminati) took advantage of Hitler's racist ideology to divert his energies against Russia and trap him in a two-front war. They convinced him that a large pro Nazi (anti Communist) "Peace Party" was prepared to unseat the "warmonger" Churchill.

This party consisted of the Duke of Windsor (the former King Edward VIII) and appeasement-minded elitists known as the "Cliveden Set." The Nazis had longstanding social ties with this group and confided in them. Hitler seemed to overlook the fact that Windsor went to stay at the Rothschild castle in Austria after he abdicated.

Rudolph Hess, the Deputy Leader of Nazi Germany, was in contact with the Cliveden group and flew to England May 10, 1941 to negotiate peace. According to Kilzer, Hess had Hitler's blessings.

Coincidentally this was the worst night of the Blitz. Afterwards, there was a long lull in both Nazi and British bombing raids. It appears the Nazis thought they had an understanding with the British and turned their attention to the invasion of Russia the following month (June 22, 1941.)

Hitler didn't understand that the Anglo American elite was (and still is) intimately connected with international (i.e. Rothschild) finance. Anglo American imperialism is, in fact, a front for the families that own the Bank of England and the Federal Reserve. These Jewish and non-Jewish families are connected by money, marriage and Lucifer worship (i.e. Freemasonry). Both Roosevelt and Churchill were their flunkies. (All our "leaders" are.)

In 1776 Meyer Rothschild financed the Illuminati, a Masonic secret society that in turn spawned the major revolutions of the modern era including the Bolshevik Revolution in 1917. The ultimate aim is to establish the banker world dictatorship, which is at an advanced stage today.

In the 1930s their purpose was to incite a two-front war that would leave the great nation states (England, Germany and Russia) prostrate. Like all wars, the purpose was to kill millions of people, traumatize humanity, increase public debt and private profit, and make "world government" (the future UN) seem essential for "peace."

The 1930's British Policy of Appeasement was probably designed to encourage Hitler's expansionist tendencies and to provoke war. Douglas Reed, the (London) Times Correspondent in Berlin, was first tipped off to something fishy when his newspaper suppressed his warnings of the Hitler menace. (See his Controversy of Zion)

Why would the financial elite also want to destroy Russia, which they created?

The transcript of the 1938 NKVD interrogation of C.G. Rakowsky (a.k.a Chaim Rakeover) provides the answer. Rakowsky was an intimate of Trotsky's and former Soviet ambassador to Paris.

Rothschild's agent Leon Trotsky was supposed to succeed Lenin but got sick at the critical moment. Stalin was able to assume power and divert Russia from Rothschild control.

In order to control Stalin, international finance was forced to build up Hitler and the Nazi party. Rakowsky confirms that Jewish financiers backed the Nazis although Hitler was not aware of this.

"The ambassador Warburg presented himself under a false name and Hitler did not even guess his race... he also lied regarding whose representative he was... Our aim was to provoke a war and Hitler was war...[the Nazis] received...millions of dollars sent to it from Wall Street, and millions of Marks from German financiers through Schacht; [providing] the upkeep of the S.A and the S.S. and also the financing of the elections..."

Unfortunately for the bankers, Hitler also proved intractable. He started to print his own money!

"He took over for himself the privilege of manufacturing money and not only physical moneys, but also financial ones; he took over the untouched machinery of falsification and put it to work for the benefit of the state... Are you capable of imagining what would have come ...if it had infected a number of other states and brought about the creation of a period of autarchy [absolute rule, replacing that of the bankers]. If you can, then imagine its counterrevolutionary functions..."

Hitler had become a bigger threat than Stalin, who had not meddled with money. The British were not going to make peace with Hitler because he had stopped the banker's racket. Furthermore, the Illuminati wanted an extended war, the ruin of Europe and the expansion of the USSR.

The book "Financial Origins of National Socialism" (1933) by "Sydney Warburg" provides another glimpse of how the Illuminist clique supported Hitler. This 70-page booklet was suppressed for many years but was republished in 1983 as "Hitler's Secret Backers."

"Warburg" describes a July 1929 meeting with "Carter," the President of J.P. Morgan's Guarantee Trust, the Presidents of the Federal Reserve Banks, "the young Rockefeller" and "Glean from Royal Dutch." These are all Rothschild dominated.

It was determined that Warburg who spoke German should travel to Germany and ask Hitler how much money he needed to overthrow the state. The only stipulation was that Hitler adopts "an aggressive foreign policy."

"Warburg" details five meetings with Hitler between 1929 and 1933. The first took place in a beer cellar and Hitler calculated his needs on the back of a paper plate. About $25 million was transferred. This was extremely important in the depth of the depression because the Nazis provided food and shelter to many of their supporters.

Hitler wasn't told the reason for this support and did not ask. On two occasions, he wondered out loud if "Warburg" was himself Jewish but dismissed the idea before "Warburg" could reply.

There is no "Sydney Warburg" but the internal evidence suggests the author could be James P. Warburg, son of Federal Reserve founder Paul Warburg. General Ludendorff's wife testified at the Nuremburg trials that James P. Warburg was the conduit through which eventually $34 million was transferred from Wall Street to the Nazis.

One wonders why anyone would go to this much trouble to alienate the most powerful people in the world if he weren't sincere. The only people with the power to suppress it are the ones it incriminates, and they have a record of suppressing similar works.

The winners write history. Our view of Hitler and the Second World War is largely a Jewish view.

Paradoxically Hitler was created and manipulated by the bankers he railed against. He lost the war because he didn't appreciate their larger agenda. He naively failed to recognize that they controlled England and the United States. It's as if he didn't believe his own propaganda.

Blinded by racist zeal, he made a fatal blunder (from his point of view) of not neutralizing England by seizing the Middle Eastern oilfields. He made another fatal error by not promising to liberate the Russian people from oppression. Nazi brutality turned the Slavs into implacable fighters.

But for his demented racist ideology and consequent barbarism, Hitler might have done some good. Many Germans and even some German Jews supported him. Instead, he was another pawn in the Illuminati's diabolical game.

Inner SS inductees had to prove no Jewish blood for 10 generations, yet Hitler is taking out loans from a Jew without even asking? Would not surprise me if he knew it and as he said "we will deal with the Jews after the war". Naive in the extreme if so, or duplicitous. (and why I am taking a sabbatical out this year to learn German - sabbatical not sabbatean).

I might be going a bridge too far, but I reckon that most of the cast of the recent TV series Das Boot look a heck of a lot more Jewish than the original 80's movie. I'd bet my drought struck (geoengineering victimised) 'farm' on it.

oh and JFK's father in England whilst the war got started was staying in a J P Morgan mansion whilst he got the lions share of Scottish Whisky export trade to the USA.

Ludendorff's wife's husband was tortured along with the rest, so a few more grains of salt there