Current events resemble one of those "Magic Eye" pictures. Gaze at it for a few minutes and gradually the face of Satan appears.

You don't believe in Satan? Look around.

God and Satan represent spirit: good and evil. People choose to manifest one or (usually) both. Often they are deceived and do evil thinking they're doing good.

Look at our "leaders." Many literally belong to a Satanic cult called "Luciferianism" or "illuminism," which is the basis of Freemasonry. This cult pays lip service to God but really believes that Lucifer, the "bringer of light," is God. It believes God is evil because He requires people to repress their carnal appetites.

Sponsored and controlled by international finance, Freemasonry has dominated Western history and culture since the so-called "Enlightenment." Both George W. Bush and John Kerry belong. Churchill, FDR and Stalin were Masons. So were George Washington and dozens of US Presidents. (More on this later.)

At the risk of sounding melodramatic, their goal is to hijack mankind from its natural course and establish a New World Order based on Lucifer's rebellion against God. They are enslaving humanity mentally spiritually and physically applying selectively their platitudes about "tolerance" "diversity" and "human rights" .

If you understand this framework, you begin to see Satan's face in the "Magic Eye" picture presented each evening on the "Nightly News."

The public execution of Terri Schiavo resembles a ritual human sacrifice. Others have commented on the Satanic signatures in the events leading up to the execution.

This sad affair appears contrived to deny the sanctity of human life and further brutalize society. The court denied Schiavo's parents guardianship even though her husband had started a new family with another woman. Apparently, his motivation for putting Terri to death was to keep the money from the settlement intended for Terri's care. Any court could see this yet it they refused to act. The Bushies can rig an election, cover up 9-11, gut the Constitution but they can't feed a disabled woman?

A larger satanic agenda is at work. The Luciferians intend to cull the human race through war or disease. We are squatters on their planet; they need only so many. So it makes sense to inure us to senseless killing.

Whether in rituals of war or murder, human sacrifice also has a Satanic significance. Apparently, Satanists derive some kind of power from the spirit of the dying victim.

Also, as others have pointed out, events like Schiavo's execution are designed to gauge public reaction. They are measuring how far they can go and how fast.

THE WAR AGAINST ISLAM

In a recent essay, philosophy professor Joseph Lawrence observed that in Iraq,

"America is at war not with international terrorism, not with Iraqi insurgents, not with Islamic fundamentalism - but with Islam itself, a world religion rendered problematic by its failure to honor the distinction between church and state, a failure that makes reconciliation with the secular order of modernity impossible...

While Bush has consistently maintained that the war on terror is not a war on Islam, it is important to know that many of his most vocal supporters disagree. Central to their viewpoint is the idea that, because Islam never had a "reformation" comparable to the emergence of Protestant Christianity in the16th century, it is necessarily anti-democratic and incapable of functioning in the modern world."

What we call "secular" is in fact a disguise for Luciferianism, a religion of Satan worship. This fact is hidden under a facade of tolerance of all religions. But this tolerance masks an active hostility (i.e. intolerance) of genuine religions like Christianity and Islam that assert a supreme moral force in the universe called God. Luciferians work to infiltrate and destroy these religions. (see my "Is the Pope Catholic?")

Luciferians assert the supremacy of human reason, which is mostly self-interest with spin. Reason divorced from an objective morality is meaningless.

The attack on the World Trade Center was perpetrated by the Masonic financial elite to justify a police state and a war on Islam. The political and cultural elites know this and are accomplices. They spent more money investigating Monica Lewinsky than 9-11. The War on Iraq is really about destroying God-fearing Muslims.

Again, the devil's face is behind current events. Paul Wolfowitz, the architect of the Iraq war gets the Presidency of the World Bank, another institution dedicated to globalization, i.e. centralizing wealth and power in the hands of the London-based financial elite.


CLUES TO THE MASONIC ORIGIN OF THE UNITED STATES

The USA was established by Masons to advance their New World Order. This sounds shocking but the evidence abounds. Masonic symbols are in plain view.

Occultists believe that the presence of these unrecognized symbols corrupt the minds of the unsuspecting public. The Great Seal of the United States, adopted in 1782, features the unfinished pyramid and the evil eye of the ancient Egyptian God Osiris. The inscription is translated "Providence favors the New Secular Order." It is found on every one-dollar bill.

Another Masonic symbol for Osiris, the five-pointed red star, a Satanic symbol, became the emblem of another Masonic venture, Soviet Communism. (The Star of David, representing Masonic Israel is also an occult symbol. The inverted triangles represent God and Lucifer.)

As you may know, Washington DC's street grid replicates the Masonic compass and five-pointed star. The Washington monument, an obelisk, is a Masonic symbol. George Washington and most of his generals were longtime Masons. Robert Livingston, Grand Master of New York's Masonic lodge, swore him in as President using a Masonic bible.

Many leaders of the American Revolution, including Benjamin Franklin, Thomas Paine, Paul Revere and Ethan Allen were masons, as were 28 of the 40 signers of the U.S. Constitution.

It appears that the American Revolution, like the French and Russian, was designed to advance the Masonic program of overthrowing Christian civilization. Americans may have little idea of the true nature of their country. The Masonic influence is kept secret because it is essentially Luciferian and anti-Christian.

The "modern" world is essentially Masonic or Illuminist in character. Recognize this in the rejection of God, Islam and Christianity, and in the naturalistic glorification of sex, pornography and sexual deviance.

Recognize it in the promotion of rebels, revolution and an illusory freedom. There can be no freedom or democracy when mass media and education are tightly controlled.

Recognize it in the ridicule of authority, be it husband, parent, religion or nation.

Recognize it in the rejection of spiritual absolutes (like truth and goodness) and the adoption of moral relativity and subjectivity in their place.

Recognize it in the denial of ideals and the lack of discussion of our collective future. This is determined by the elite behind closed doors.

Modernism is not the culmination of human civilization but a period of decadence and decline leading to destruction. It is the reign of pretence, hoax and trivia leading to tragedy. (See my "Countdown to World War Three")

Evil is a cancer based on seeking happiness by accumulating more material things and power rather than letting go of both. The best things in life are free, and that really rankles the rich. Even for the superich "Enough is always a little more than one has." (Samuel Butler) Slaves to their wealth, they have enslaved us too.

Mankind is the victim of a monstrous conspiracy of cosmic proportions. God is what makes man human. Deny Him and we consign ourselves to hell.

See Reader Feedback Below (Scroll Down)

· What Do We Do Now?
· #Scamdemic - Are We Headed for Recovery or Dystopia?
· Don't Be So F**king Naive
· Lockdown Message: You Have NO Rights
· We May Never return to Normal
· 9-11 Again - Except WE'RE Trapped on the 94th Floor
· Coronavirus is Another Live Drill
· They Created Flu Hysteria to Destroy Freedom
· Corona Psyop- Why This is Happening
· Swiss Research Site: Pandemic is a Total Fraud
· Pandemic Masks Satanist Power Trip
· 2009 Lawsuit Exposed Illuminati Bio-Terror Vaccine Plot 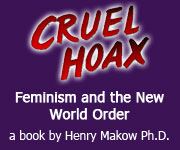