Israeli-Based Online Casinos are a Scam 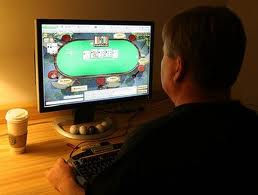 Many online casino companies are based in Israel

and prey on customers worldwide.

Our correspondent, "Saul" worked for one.

"For non-Jews living within America, Canada and Western Europe, it's important to realize, whatever strategic military purpose Israel may serve, do not be fooled -- the Israeli government and most Israelis in general could not care less about you, think you are suckers and fools, and  shamelessly rip you off whether you come here as a tourist or conduct business on-line."

Following my employ at the wonderfully ethical pharmaceutical company, I worked for two online casinos, both located in downtown Tel Aviv. The pay in the casinos was significantly more than at the "pharmaceutical" company, and you can imagine why. Without any product to deliver, it was a much more profitable business.

Like the pharmaceutical company, we hid our location from our customers (the players), and didn't do business within Israel itself. Most of our victims were from the USA and Canada, though we had "customers" from all over the world: France, England, Germany, you name it. A fair share of players were from the Arab world too.  You can imagine how happy they would be to know they were being blatantly ripped off by an Israeli company. Both of these companies claimed to be located in the Caribbean.

The business was a scam. An elaborate money-laundering scam which I have little doubt the government of Israel is well aware. Both businesses were located in prominent buildings within Tel Aviv. There are hundreds of these types of businesses in this country.

The terms and conditions of the casinos (we operated over 20 from our office) made it impossible for players to actually win. Only the smallest winners could ever come out ahead, and only if they got extremely lucky and won right away, having played only a little.

Even then, it was difficult to receive the winnings and they would all cry scam and swear never to play again. Little did they realize, hundreds upon hundreds of such casinos are operated in exactly the same manner by Israeli companies. The business was hugely profitable. Beyond a sure thing. And illegal. (See "Online gambling, a pastime whose time has come.").

My employers primarily profited from on-line slots games. Blackjack came next, followed by roulette. Roulette players NEVER won. The times players did win, they were accused of breaking the terms and conditions by using a "system or strategy that defeats the laws of randomness." In other words, if they were skilled players, we wouldn't pay.

If they lost, no problem. They could play. Very few players ever won playing blackjack either. The odds were with the house, typical of any casino,but more so with an on-line casino where the odds are easily stacked with a click of a button. And of course slots games are fixed so the house always wins. In our case, this inherent profitability was hugely increased by the fact that we only paid out in small increments and intentionally took our time.

The delay in payouts was partially due to the money-laundering nature of the business. We were located in Israel. Funds had to go through a bank in Cyprus, and then to the Caribbean, and finally to the destination country. It was likely even more convoluted than that -- I did not work in our finance department. Bank problems came up all the time, as one would expect in an endeavor to hide the origin of money.

Funds coming in were just as shady. The credit card processors were surely in on the take. Transactions were always disguised as being for some other purchase -- never gaming. These included things such as medication, gift cards, and one that gave us all a good laugh, dating and escort services. Good that the wife doesn't know hubby is gambling away their life savings on-line, but not so good when she thinks he is frequenting a dating and escort service.

The new immigrants who work for these companies know full well their dishonest nature. There's no way not to. Alas, the money is too good and the cost of living too high for many people to resist the temptation. If you read my article about "shitat matzliach" you will see how this is consistent with the country's mind-set.

Jews move to Israel under the false premise of Zionism - thinking of a spiritual move that will being them closer to God - but what do they get? They end up selling their souls. This is Satanism at its ugliest, and something I daresay people should know about Israel, most especially anyone thinking of moving here under the "Jewish" right of return.

The Demon of Forex Gambling

Comments for "Israeli-Based Online Casinos are a Scam "

The plain FACTS that percentage wise, Talmudic Jews are more heavily involved in crime than any other ethnic group is almost unbelievable to begin with.

Worse, Jews turn up in every last criminal category, with the possible exception of mugging where there is a danger of getting your ass kicked.

Jews are #1 in financial crime, including the insurance racket, almost in total control of banking crime, they are the most persistent scammers in the world - of anything, pornography is pretty much a Jewish empire as is white slavery and child prostitution, gambling, of which the following insider story shows a combination of scams, is also mostly a Jewish controlled money factory. Even ordinary retailing becomes a rip off, In fact, anything which produces a high or quick profit or even if it gives control more so than money, such as government, education and even latter day religion, seems infested at the top with Jews.

If it isn't corrupted before Talmudists swarm into it, it quickly becomes so afterward. Murder, assassination, mayhem, unlawful imprisonment and torture are no exceptions. Any kind of humiliation of non Talmudists is practiced by them, often as fun time games. Human life means nothing to them unless it is their lives.

Moreover the Talmudic plan for world conquest as revealed in the exposed Protocols of the Learned Elders of Zion is a totally heartless, totally selfish and fiendish plot to rule all the earth by whatever cruelty combined with trickery will cow the people of the world into submission of slavery. This type of perfidy is best cartooned as a fawning face in your face with one had patting your back while the other aims a dagger next to it.

All of this stems from the satanic, Talmudic attitude of "Jews are people, everyone else is cattle," meant for them to use as they please, including non Talmudic, Biblical observing Jews. But with a special, spiteful, vitriolic, murderous hatred of Jesus Christ and Christians.

How anyone who calls him/herself "Christian" can label such inhumanity "God's chosen" boggles the mind. Truly. The actions and mindset of these people is purely satanic, the opposite of godly.

The man who wrote the exposÃ© below, living in Israel, calls the whole economy there pretty much a criminal, rip off operation. And he doesn't even mention the massive free money handed to Israel constantly by the Talmudic captured American and German taxpayers.

After my Jewish grandfather was widowed he found companionship with a Jewish widow he and my grandmother had known for years. When I was in my early 20s and starting entrepreneurial ventures, this lady put me in touch with her grandson, who at the time (circa 2003) was around 30 and about to launch his own online gambling site.

We spoke only once or twice but I remember looking up his site six months to a year later to see how it was doing and all these search engine hits came up saying what a scam it was. Although a bit of a big talker, BS type, he had seemed enthusiastic and genuine enough over the phone. He didn't say anything like, "Yeah, we're going to ream these suckers."

The gambling world overall doesn't attract the most honest or hardworking people, so while this guy was Jewish I don't know to what degree that played into it. The Jewish relatives around my age are lawyers, wildlife biologists, chefs, and engineers. (While not very religious they do support Israel for the most part, but I guess that's a whole other conversation!)